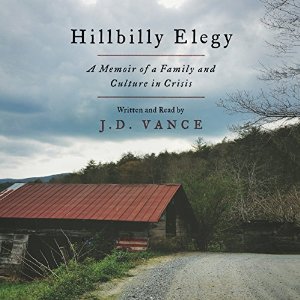 I just finished reading J.D. Vance’s best-selling memoir, Hillbilly Elegy. While the rags-to-riches story contains much of the expected Horatio Alger drama, it was generally disappointing in terms of composition and execution. Much of Vance’s childhood was spent in rust-belt Ohio, even as his heart remained in Eastern Kentucky. His insistence on self-identification as “hillbilly” often seems more affectation than honesty, even as the details of growing up impoverished, amidst addiction and dysfunction are clinically reported. Not to spoil the story, but the author is saved by tough-nosed grandparents, innate ability and the Marines. He goes on to Ohio State, Yale Law, and his current ascension to the 1% as a partner in one of the nation’s largest venture capital firms. Despite this fertile storyline, it has none of the lyricism of my favorite contemporary memoirs, such as Annie Dillard’s American Childhood, or Mark Salzman’s Lost in Place. It can’t match the crackling, self-lacerating humor of Running with Scissors or Little Failure.

Then in the final chapters Vance saves the book with his startling leap of insights, using the expanse of his family, friends and fellow descendants of blue-collar failure to illuminate modern America’s crisis and the rise of Trumpism.

Back home in Ohio after graduation, during the summer before starting law school, Vance notes that “the incredible optimism I felt about my own life contrasted sharply with the pessimism of so many of my neighbors…there was something almost spiritual about the cynicism of the community at large.”

He explicates the lack of heroes for his once-thriving industrial town (Middleton) and the absent of “the most basic promise of the American Dream — a steady wage.” What follows is his description of the irony of this intensely patriotic segment of America’s detachment from its political leaders and government. White conservative Americans, like most of the population of his hometown, have been shown to have widespread beliefs in these kinds of oddities: their President (Obama) was not born in the United States, and is a Muslim with ties to extreme terrorists. “Obama,” he writes, “strikes at the heart of our deepest insecurities.” That America has become not only a place where people of color can triumph, but one that is given to the urban and educated. The rampant belief in far-fetched conspiracies is not, Vance assures us, just a matter of ignorance. His people are exposed to the mainstream narratives and the debunking of these myths, “they simply don’t believe them.” They prefer the narratives passed along via social media, promulgating such nonsense as the U.S. government’s role in 9/11, Obamacare’s plan to plant microchips in all Americas (“the mark of the beast”), the engineering of mass murder to engender an effort to confiscate guns, Obama’s intent to declare martial law and ascend to a third term.

Vance then makes a brutal indictment of the conservative right’s culpability in this movement. By championing the cause that government is your enemy, “the message of the right is increasingly: It’s not your fault you’re a loser; it’s the government’s.” As an example of how far this thinking has infiltrated the American mind he cites his father’s reaction when he proudly relays the news of his acceptance at Yale Law. His father asks if he had pretended “to be black or a liberal.”

All of which matches nicely with Thomas Piketty, who had his own best seller with his 2013 Capital in the Twenty-First Century. He persuasively argues that the free market, which is often portrayed by conservatives as a great force for good if left to its own devices, instead continually increases inequality. As economic mobility continues to decline in America (we are now well behind many other industrial nations), the once exalted ideal of meritocracy has lost much of its power, and as Piketty argues, is instead used to support the perverted Protestant notion that worldly riches are a sign of just rewards, if not divine approval. This, by the way, a pillar of the belief system promulgated by Trump’s spiritual mentor, Norman Vincent Peale.

Hillbilly Elegies is a powerful look at why the greatest threat to the American experiment is not foreign-based terrorism, but indigenous frustration and pessimism, fueled by ill-serving Americans who find it useful to promulgate conspiracies and hate and empty promises that we can go back to a time when the factory across town had plenty of great-paying jobs.