What Would Trump Do? 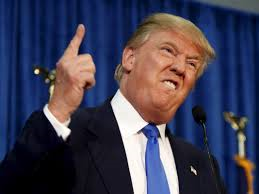 As the shift in power looms, I can’t be the only one thinking about this. For instance, what would Trump have done after the 9/11 attacks. Would he have figured out who was responsible before anyone else, because he is so smart and everything, and ordered an immediate retaliation? What about minor provocations? Remember the U.S. underwater drone the Chinese fished out of the China Sea? A lot of commentators on Fox and elsewhere were complaining that China felt they could act with impunity because Obama was too weak to respond. What if Trump was of the same mind? Where would such a tit for tat lead? Of course, the situation could be more dire. Here are the type of imagined scenarios that have been keeping me awake at night:

2. Pakistan
Islamic fundamentalist factions in the Pakistani army stage a coup. Nuclear weapons are about to be placed in the hands of people who have publicly declared their intention to kill as many Americans as possible as well as wipe Israel off the face of the earth. They also send out a series of communiqués mocking and baiting President Trump personally. What will he do?
A. Before he can make a decision, India, the target for most of Pakistan’s arsenal, makes a preemptive military strike, first by air, and then with ground troops. What will Trump do?
B. Before any action can be taken the new government claims to have a nuclear bomb smuggled into Tel Aviv and will explode it if certain actions aren’t taken immediately. Israeli scrambles its nuclear-bomb carrying air force. What will Trump do?

3. Guantanamo
In a surprise attack a well-organized band of suicidal ISIS-organized commandos storm Guantanamo Bay in an amphibious assault, overwhelming the U.S. forces and freeing the captives. They begin assassinating hostages hourly until their demands are met. What would Trump do?

4. ISIS
U.S. intelligence informs Trump that all the major players in ISIS are meeting in Raqqa. Their exact location can’t be determined, but it may be the only chance to destroy all of them in one strike. Military advisors inform Trump that the only way to be sure to make the kill effective is to use a tactical nuclear bomb. They estimate the collateral damage at 200,000 civilians, but assure Trump that most are ISIS sympathizers. Trump confers with Putin who says go ahead. What would Trump do?

5. Russia
A shocking and horrific terrorist attack in Azerbijan, a former Soviet province, has unsettled the entire region. ISIS claims responsibility. With Azerbijan’s blessing, Soviet troops pour to the border, preparing for a multi-national coordinated assault on ISIS fighters based over the border in Iran and Syria. U.S. air power is fully employed in the assault. However, Russian troops continue past ISIS strongholds and blitz across the region, taking control of all the major oil producing regions in Iraq, Kuwait and Saudi Arabia. Putin claims this is a necessary step to strangle the oil money that is fueling ISIS and its pipeline of fanatical fighters, trained in oil-financed fundamentalist madrasas across the region. What would Trump do?

6. China
China claims a U.S. destroyer has strayed into Chinese territory and scrambles its air force and navy to capture it. Trump orders the destroyer to resist. In the resulting conflict, the U.S. destroyer launches a cruise missile which sinks China’s newest aircraft carrier, killing some 2,000 sailors. The U.S. destroyer is also sunk, with loss of the entire crew of 158. What will Trump do now?

It’s fun! Make up your own scenario! All of you Trump voters, join in. After all, how could things get any worse?