I’m listening to David Axelrod read his 2014 political memoir, “Believer.” Axelrod was Obama’s chief strategist in his two presidential campaigns. Although written long before Trump’s rise, he provides a lot of insights into the recent election. For instance, the way that incumbent presidents (especially 2-term) are often replaced by candidates who are polar opposites. We may forget how heartily Obama was initially championed as an agent of change.

One aside especially caught my eye. In the spring of 2006 Obama was a freshman senator, just two years out of the Illinois legislature. Yet there was buzz about his running in 2008, rumors he staunchly refuted. Then two of the most powerful and experienced Democrats, Charles Schumer and Harry Reid, called him into a private meeting. They encouraged him to run. Though both acknowledged they couldn’t publicly oppose the front runner, Hillary Clinton, neither “thought Hillary could win.” 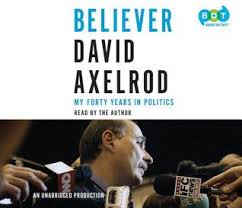