In a lengthy conversation with a well-established literary agent regarding one of my young adult books, he boiled everything down to two questions: “What are the stakes? What is the worst thing that can happen to your main character?” It seems like a lot of successful young adult literature take these questions to extremes. Not only are the main character and his or her loved ones facing personal extinction, the entire fate of mankind is at stake. Think Ender’s Game, or the more recent The Fifth Wave. The Hunger Games may be the perfect example of piling on when it comes to stakes: not only is Katniss facing likely and imminent death, her vulnerable little sister, mother and cat are likely to suffer starvation in her absence, while her death, will, alas, prevent the reader from discovering just how her romantic attachment to two lively prospects will turn out. And don’t forget the entire oppressive society which is just waiting for its Joan of Arc to reinvent itself as something wonderful, say 20th century America.

Of course there is a gap between the massive bestsellers and the more sophisticated tastes of the National Book Award panel. None of the aforementioned blockbuster books have been shortlisted for the award. Wouldn’t the panel be more inclined towards stories of personal development, heartwarming or heartbreaking tales of coming of age, carefully wrought literary novels?

I thought it would be interesting to take a look at this year’s finalists through the same lens the literary agent supplied. What are the stakes and what is the worst thing that can happen to the main characters?

True Blue Scouts is in many ways an old-fashioned children’s book, one aimed at younger readers than the other finalists. It features sentient raccoons who enjoy listening to the radio, a yeti-like swamp monster, a female alligator wrestler, an evil land developer and a young girl as hero. But the stakes are more modern: ecological disaster, the loss of an endangered (if mythical) creature, while overlapping the timeless: the loss of home and hearth. What is the worst thing that could happen to the main character? The world she knows and love could be lost forever. 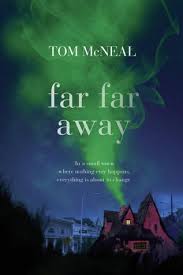 Far, Far Away also is self-consciously part of a tradition, as it is narrated by the ghost of one of the Grimm brothers of fairy tale fame. Here the stakes start out in familiar young adult territory: the battle between being exceptional and fitting in, a budding romance between the main character and a strong-willed and stunning redhead, popularity and shunning. Once again the loss of home and hearth develop into a major stake, but as fitting the older readership and the fairy tale tradition, the story moves from a romp in the woods into a much more sinister, if far fetched, finale which might have been borrowed (after removing the titillation) from a James Patterson thriller.

Picture Me Gone strikes me as a more traditional National Book Award selection. In this carefully plotted and composed tale, the young main character (who may be cited as twelve, but comes across as sixteen) is an exceptional girl with an otherworldly sensitivity to others. For instance, she identifies a diner waitress as pregnant even as realizing that the waitress doesn’t yet know it. She’s especially good at understanding the German Shepherd who pines after the main subject of the book, a missing friend of her father’s. Unlike most YA, this book is firmly placed in the world of parents and their associates. The stakes are also much more subtle than most popular teen books. While the ostensive object of the book is the search for a missing man, the real subject is deceit and trust. What is the worst thing that can happen to the main character? She will lose her faith in her father and adults in general, in her fundamental faith in goodness and honesty. A long way from the battlefields of The Hunger Games indeed.

In The Thing About Luck, the twelve-year-old main character begins the story under stress. Her parents have returned to Japan to care for an ailing relative, and she and her grandparents are on the road, part of a crew of migrant harvesters traveling from Texas to Kansas. Unlike the Grapes of Wrath, these workers aren’t using their hands, but $300,000 machines. What is at stake? Well, if they don’t earn their keep, the family will lose their house and hearth. What is the worst thing that can happen to her and her autistic brother? They could end up friendless and unmoored and she will disappoint her grandparents. As more of a middle-grade book pitched to younger readers, this seems in line with the genre. Death, dismemberment and eating disorders are the stuff for fifteen-year-olds, not twelve-year-olds.

I wish I could comment on the dual graphic novels by Gene Luen Yang, which are favored by some to win the award, but I haven’t ventured there or into the whole world of graphic novels. But the setting, the Chinese Boxer wars, and the subject of war and societal chaos, assures me that the stakes here are certainly life and death.

I am worn-out by the stakes of a middle school age MC entrusted with saving the world (as we know it) by themselves. I’d like to see a whole lot more, at that age, discovering they can save themselves. But those are the “quiet” books.

No doubt every National Book Award Finalist is spectacularly written. I just wish “the stakes” were closer to reality just a wee bit.