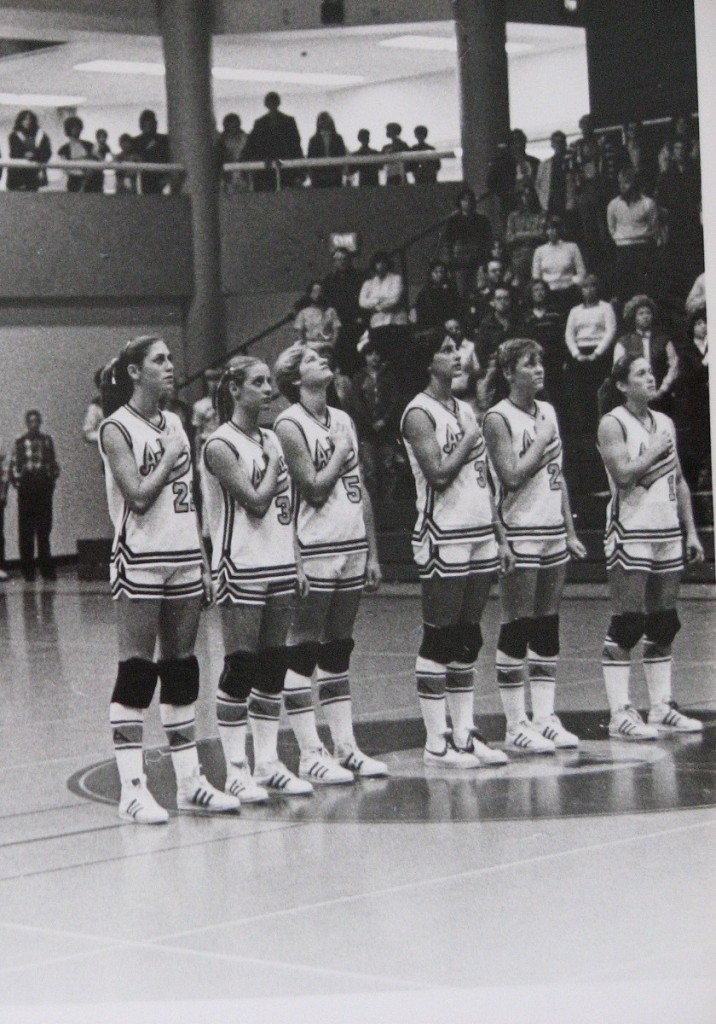 I happened to be catching a bit of the Big Ten Basketball Championship game on March 7, 2014 between Nebraska and Minnesota when I was startled by a familiar face. The Nebraska head coach, Connie Yori. I had last seen her in 1981, in tears after losing the state championship game, 53-51. In the semi-finals she’d put up 49 points and was the best high-school girls basketball player I’d ever seen in person.

Back in 1980, when I still thought being a sports reporter might be a dream job, I was doing some freelance writing and pitched The Iowan Magazine on following a girls’ basketball team for an entire season. This was back near the beginning of the Title IX sports boom, which had only gone into effect two years earlier in 1978. When I had been in high school a decade earlier my large Iowa high school had a girls’ golf and tennis squad, but offered no team sports for girls such as basketball, volleyball or soccer. Still, Iowa girls’ basketball was something of a cultural phenomenon, with the state championships selling out the largest venue in the state, Veteran’s Auditorium in Des Moines.

But it was a small-town sport. The state tournament featured teams from places like Montezuma, What Cheer and Grundy Center. And the girls played under odd rules. Each team fielded a three-person offense and a three-person defense. In deference to the tender nature of the female sex, no player was allowed to cross the center line, and exhaustion and collapse was further protected by a two-dribble rule.

I remember the concern which crossed the editor’s face when I proposed this story.

In other words, I wasn’t to expect more than the normal compensation, which if I remember, was in the low-to-mid three figures.

I wasn’t daunted. I could bolster my payment a bit by doing my own photography.

At the time I was living in Ames, Iowa, where the large metropolitan high schools didn’t field teams. To the north there was a strong program in Story City, and to the south, in Ankeny. I decided to go with Ankeny, which had won the state title the previous year. I contacted coach Dick Rasmussen and he gave me the okay. I started following the team in the fall of 1980, attending some practices and scrimmages. On more than one occasion the coach would ask, at the end of practice, if there anything the players needed to work on. Yori would always say, “Let’s play a five-on-five game!”

Rasmussen would roll his eyes. As far as I now, he never relented.

It turned out I had found my way to one of the legendary coaches in Iowa prep history. One of the first things he said to me when I introduced myself was, “You ought to see them play softball.” Only years later did I bother to look it up — they’d won the state title three years in a row: 1978, 1979 and 1980.

Behind Yori, Ankeny had a great season, making it to the state finals, where they lost to Norwalk on a last-second shot. And yes, there I was, shamelessly photographing the teary aftermath, although thankfully, none of those shots were featured in the Spring, 1982 issue of the Iowan.

Yori went on to a stellar collegiate career at Creighton and then I lost track of her, until last night, when her Nebraska team was on national TV. I found a stack of 8×10 glossies of the season I had printed for the story, and I’m planning on bundling them up and sending them on to Yori at Nebraska. I bet they’ll bring back some good memories.